Hello folks~
To achieve my goal to be more active in this fandom full of naked pillows (wich I didn't ordered, for obvious reasons), let's share with you all scans of an item that isn't that common, or should I say that is somehow rare I think. This is the Uesugi Kenshin Postcards Set, probably sold during one of the first Kenshin Kousai events if my memory is good. It feaures lots of awesome photos, and Belle's mom gifted it to me quite some time ago, I can't thank her enough for that lovely gift. Sorry for not posting the scans before, I hope I'm forgiven now ! <3
The postcards aren't that big, so the quality cannot be as good as a big book, but it's still pretty gorgeous to me, so I do hope you'll enjoy them ! :)

Do wathever you want with them, just don't claim them as yours, thanks. Also, if you repost, a credit or a thank you is always appreciated of course ! :3

Hello everyone ! :)
I've been seriously wondering about something lately, something quite big that I'm asking you all about it. It's linked to the past old GACKT.com website that have been totally changed, wich means the old contains have been deleted forever. But first, let me explain what is it all about.
Lemme give you a short description of what those two places mentionned in the title looked like : 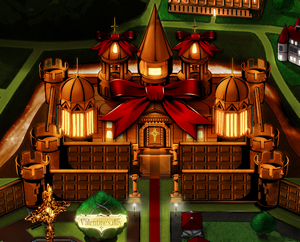 - GACKT's dog Eneru had a blog with tons of pics of him (and sometimes of G) talking about various random stuff probably. You could clearly see that G put his dog in some places in purpose, or sometimes clearly did a photo manipulation with his dog looking at something. I truly don't know what the text is all about, but there's quite a few pages already, and here's how it basically looks like when you could watch it back then. The blog was only viewable for the DEARS fanclub members, it wasn't available publicly. 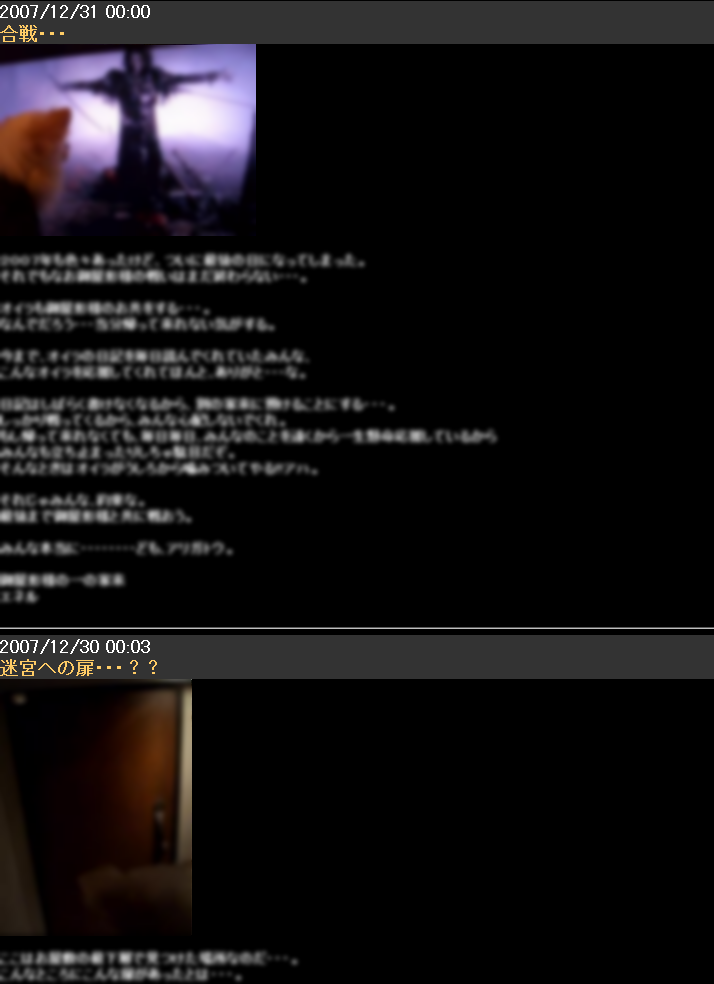 - Dears Theater was a place included in the now gone Dears Village. This place featured a hundred of videos of various stuff. Some were simple previews of his old PV or concerts, some were exclusive vids like special camera angles for Setsugekka's PV, but the biggest part of the contains was available for FC contains. Like special messages, funny stuff, etc. This place was used to publish new videos related to G's recent activities, but got forgotten after a while, but a lot of old videos deleted back then were still there. 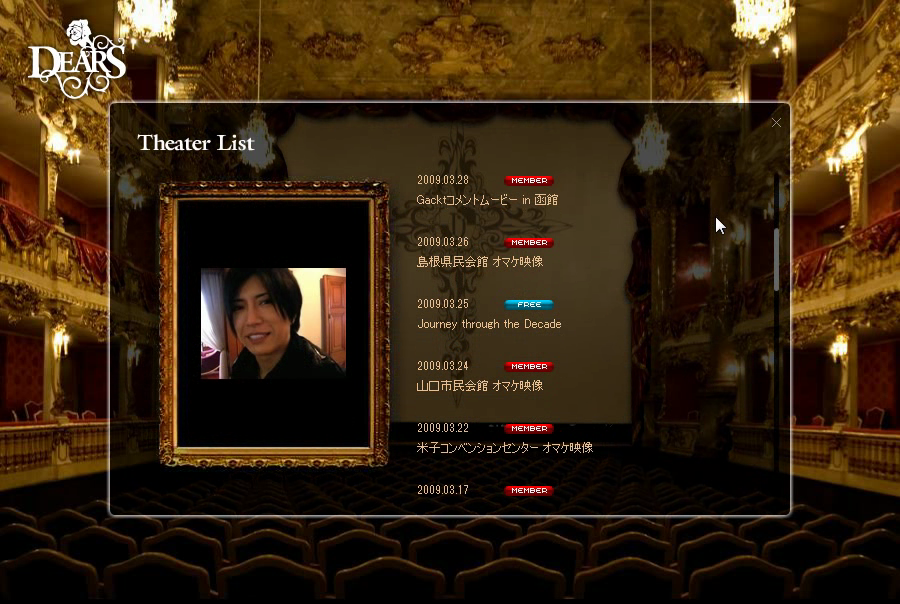 My point about describing those two places is the following.
They are now totally gone, wich is for me somehow a hole in what GACKT did in the past. Lots of contains disapeared too. I somehow wish to update publicly the contains of these two places, wich means the Eneru blog entries with the small pics, and the videos that were available on the Dears Theater, both public and FC ones.
I'm sure you might wonder why I think that way for these two things and not about the past MGG that have been deleted from the old GACKT.com website ? Because the Monthly GACKT Global concept is still going on right now on the newest website, while the two ones listed above have been discontinued and totally disapeared and never appeared again, and probably never will again. That is why I wish to do that, because I love sharing the love, and also because it's gone and won't appear anytime again online anymore.
I've already made a Dailymotion channel quite a while back then with right now all the public videos that were on the Dears Theater available. They were public, so I don't see why it's not okay to share them. However, the FC ones, while being uploaded on that channel, will remain private for now. The link for the channel is here : Dearstheater26100.

What's your opinion about it ?

Open to: All, detailed results viewable to: Friends. Participants: 59

Would you want Eneru's blog contains to be public, despite it being FC contains ?

Open to: All, detailed results viewable to: Friends. Participants: 62

Would you want Dears Theater FC videos to be public ?

Yes
54(88.5%)
No
7(11.5%)
PS : I was a Fanclub member for 3 years, and will recieve my new G&LOVERS members ID card soon, so I'm only thinking that way because I think this can be stuff that people might enjoy getting their hands on, that's it. And sorry if the Fanclub thingy is a sensitive case, I'm aware of that, otherwise, I wouldn't even make that poll in the first place, but I need to know wich choice would please as much people as possible. :)